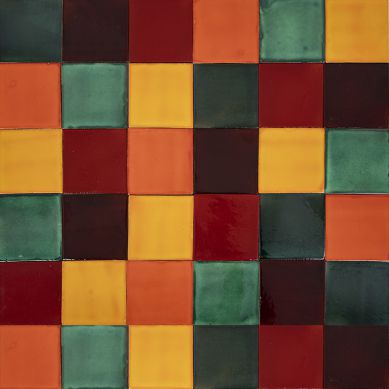 Mexican single-colored, glazed tiles, arranged in a patchwork consisting of 90 pieces of 10.5 cm x 10.5 cm. The tiles are produced using traditional methods, taken from the Spanish method of Talavera.
Talavera tiles
The Spanish Conquistadors conquered Mexico at the beginning of the 16th century and this had a huge impact on the cultural and artistic space. Among other things, the Spanish implemented the art of producing ceramics, later known throughout the world as Talavera. The name of the method of making ceramics Talavera comes from the Spanish town of Talavera de la Reina, where the production of ceramics by this technology began.
Ceramics produced in the Talavera style is characterized by a thickly applied dye, usually natural, which allows to obtain a color with high saturation. Subsequent glazing and firing allows to obtain tiles with high durability and abrasion resistance.

The patchworks are composed of one-colored tiles, they come in different shades. And so:
Intenso - combines with a coherent and harmonious way of intense colors,
Malaquita is a collage of tiles inspired by marine landscapes, consisting of shades of blue and green,
Ciruela - set of various pastel shades with fashionable pink powders,
Caramelo is a composition of warm colors, with a predominance of yellow shades,
Borgońa - set of tiles in warm colors, with a predominance of green.

Dorotea - round copper sink from Mexico

100,00 € 120,00 € pcs in stock | Shipping in 24h
We give cookies to anyone who visits our website! By using this website you agree to their use in accordance with current browser settings. Close More information