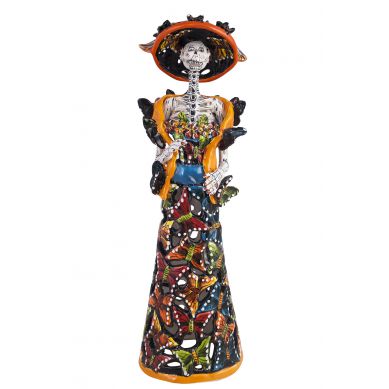 The Calado Mariposa figure referring to the symbolism of La Catrina with a height of 58 cm and a base diameter close to 20 cm. The head, or rather the skull of the figure is adorned with a dressed, colorful hat, and the figure is dressed in a multicolored evening dress. The colors used by the artist to color his hat and dress refer to the colors used in the Mayan and Aztec times, these are mainly blue, yellow, orange and green.
Each element of the figurine was made in a separate form, while details such as frills and braids were made by the craftsman himself from a special mass. The figurine was also hand-painted by the artist and then fired in a specially designed furnace. At the final stage of production, the figure was varnished, which allowed for a wonderful decorative effect.

La Catrina is a permanent element of Mexican culture, referring to the symbolism of death. The Mexicans perceive their feast of the dead, Día de Muertos, in a different way than the Europeans. The Mexicans treat death as a stage in their lives and look forward to meeting the spirits of their ancestors, their loved ones. Elements of colorful, sometimes smiling skulls, or even whole silhouettes of skeletons dressed in dressed clothes can be found in most Mexican homes. Apart from decorative elements such as figurines, the skull is often a pattern found on tiles, vases or bowls. Catrines do not scare, rather they make a Mexican smile on his face.