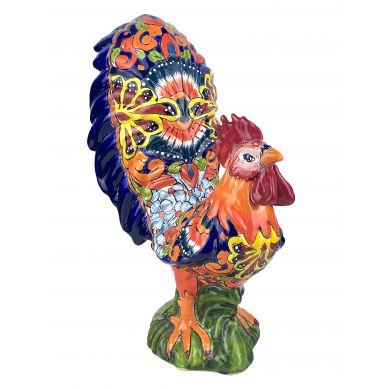 A unique Talavera style rooster figurine in various colours. The symbolism of the rooster refers to various events, from signalling the rising of the sun and the beginning of the day, to its affiliation with Mars, battle and war. Very popular in Mexico, cockfights make the bird an integral part of modern life. The rooster symbolises quarrels and anger, but also mating, fertility and life to come. The cockerel figurine is characterised by a spreading, raised tail, which indicates the beginning of the mating season. The cockerel's tail is decorated with ornamentation referring to floral elements, popular in the Talavera style. The ornamentation is painted in the colours of nature, such as orange, yellow, blue, green and red. The cockerel's head is adorned with a beautiful plume of red feathers. The figurine is decorated with a thick natural pigment, which is additionally covered with a layer of glaze, allowing the artist to achieve a 3D-like effect. The rooster figurine is often a decorative element of Mexican homes.

The Talavera method of making ceramics was brought to Mexico by Spanish colonisers in the 15th century. The first place where pottery was made using this technology was the Spanish town of Talavera de la Reina. The special, specific way of producing this type of faience was based on a double firing of the clay and final decoration of the products with patterns referring to floral elements, and then painting them with colours of nature. The whole is completed with a layer of glaze, which prevents discolouration and protects against mechanical damage.

29,00 € pcs in stock | Shipping in 24h
We give cookies to anyone who visits our website! By using this website you agree to their use in accordance with current browser settings. Close More information