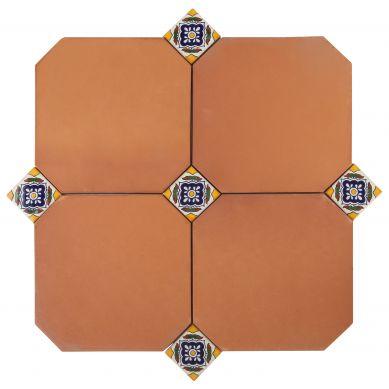 Unglazed Mexican tiles with an octagonal outline in the colour of natural clay measuring 19.5 cm x 19.5 cm. After laying the tiles, there is space in the corners for a square-shaped décor with a pattern in the Aztec style. The texture of the tiles, the way they are made and the colour refer to the ancient techniques. Tiles are 8 mm thick and decors 6 mm thick.

Findings secured by archaeologists in Olmec towns such as Tajin, San Lorenzo, La Venta and Tres Zapotes suggest the use of techniques and materials used in the subsequent production of ceramics. The ceramics made in the Aztec era were characterised by their extraordinary diversity. Initially, they were typically decorative objects such as figurines, beads and other ornaments, but later more and more attention was paid to the utility values of the products produced, plates, jugs, cups and cups were produced. It was also noticed that ceramics worked well as a material for floors and walls. Later, after being colonized by the Spaniards, new styles and techniques of pottery production appeared.

Guadalajara tiles have the shape of a square with truncated corners, which are filled with decors. Tiles laid on the floor give the floor a discreet elegance. The square-shaped decors are decorated with a geometric pattern with the symbolism of flowers. The octagonal tiles are made of natural-coloured clay, are unglazed, which emphasizes the subtle style and contrasts with the glazed, multi-coloured decors. The colors on the smaller tile can refer to Aztec culture and symbolize water, forest, sun and fire, as well as refer to Arab culture and point to sand, sky and sun.

Where to use Guadalajara tiles

The tiles will ideally blend in with rustic floors, where other clay forms will also be decorative elements. They will be perfect for the hall, living room in a classic dignified style. One should remember about very fashionable eclecticism, which allows to mix different architectural forms. Such a solution will certainly mark the uniqueness and originality of the project.

Old bricks for the floor - terracotta

Classic terracotta for the bathroom

Terracotta brick for the wall

76,00 € Out of stock
We give cookies to anyone who visits our website! By using this website you agree to their use in accordance with current browser settings. Close More information