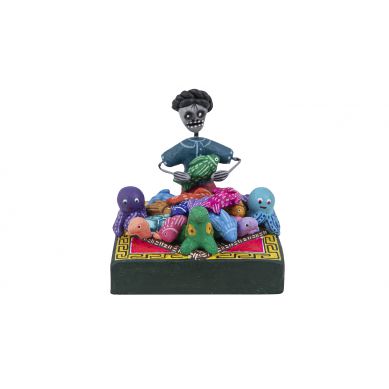 Small figurine of a seafood vendor
Figurines of people and saints are very popular decorative element referring to Mexican culture. This particular one depicts patron saint of Madrid and farmers and hard working people. The face of the saint is shown as a skull, so characteristic of the Mayan, Aztec or later Catrin culture. This form of facial representation is closely related to the beliefs and culture of Mexico, which indicates the inevitability of death, its proximity and ordinariness. Human figurines are a common decorative element adorning Mexican interiors, harmonizing with other ceramic elements adorning the space, such as tiles, jugs or bowls.

Figurines in polychrome ceramics
This method of producing ceramics dates back to pre-colonial times and is often referred to as Mixtec ceramics due to its geographical location. After the Spanish took over Mexico in the 16th century, Mixtec ceramics were enriched with Spanish-Mauritian elements. Ceramics produced in Izúcar de Matamoros or as others say in La Puerta de la Mixteca are characterized by very high quality, attention to detail and deep color saturation. Decorative pieces in polychrome clay were most often ordered in reference to religious events. Mixtec ceramic products are most often produced by artisans descended from the Castillo family, and the artisanal way of producing polychrome pottery makes it very popular with collectors around the world.

221,00 € pcs in stock | Shipping in 24h
We give cookies to anyone who visits our website! By using this website you agree to their use in accordance with current browser settings. Close More information