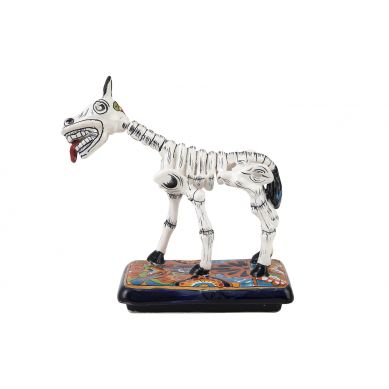 Figure of a horse
A reference to the very popular in Mexico La Catrin, a figure representing a skeleton of a horse. The figurine is white, decorated with patterns referring to the florists characteristic for Talavera style. The base of the figure in the shape of a rectangle decorated with colorful patterns symbolizes the place on earth. Colors of decorations are mainly shades of brown with elements of green and black. The figure is covered with glaze perfectly smoothing the surface.
The la Catrina style horse is a symbol of time, freedom, but also of the hard work that a man, or himself, often harnessed to during his life on earth. In ancient Greece, the horse symbolized not only freedom but also attachment and friendship - because it could recognize its owner and return to him. The la Catrina style figures bring to mind an amazing and unreal world.

La Catrina figures
La Catrina is a Mexican-specific figure referring to death. The Mexicans treat death as a stage in their journey. The motifs of costumes dressed in beautiful colorful dresses, giant hats were created by Jose Guadalupe Posada in the 19th century and popularized by the artist Diego Rivera, who was married to Frida Kahlo. Catrina is a symbol of equality of people in the face of death, its unambiguity. Catrina is a permanent element of Mexican culture, often hosted in the form of figures or paintings in the homes of Mexicans.
Mexican figurines are incredible decorative elements. Traditional craftsmanship has attracted the attention of collectors from all over the world. Unique pieces of such ceramics can achieve a very high price.