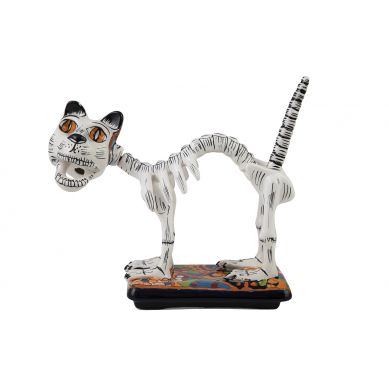 A reference to La Catrin, very popular in Mexico, figurine representing a skeleton cat. The figurine is white in colour and decorated with patterns inspired by the floristics characteristic of the Talavera style. The rectangular base of the figurine, decorated with colourful patterns, symbolises a place on earth. The colours of the decoration are mainly shades of brown with green and black elements. The large orange eyes symbolise unreality, another world. The figure is covered with a varnish that perfectly smooths the surface.
The cat in the style of la Catrina can symbolize a companion of another dead person, with whom he spent his life on earth. The cat is the hearth of the home, a creature that guards the harvest, a friend. The cat also represents cleverness, agility and cunning. La Catrina style figures create an original, slightly eerie, unreal atmosphere.

La Catrina are figures specific to Mexico that refer to death. Mexicans treat death as a stage in the journey ahead. The motifs of mortals dressed in beautiful colourful dresses and huge hats were created in the 19th century by Jose Guadalupe Posada, and popularised by Diego Rivera, the artist who was married to Frida Kahlo. Catrina is a symbol of people's equality in the face of death, its unambiguity. Catrina is a permanent element of Mexican culture, often appearing in the form of statues or paintings in Mexican homes.
Mexican figurines are amazing decorative elements. Traditional, craftsmanship has attracted the attention of collectors from all over the world. Unique pieces of such ceramics can reach very high prices.