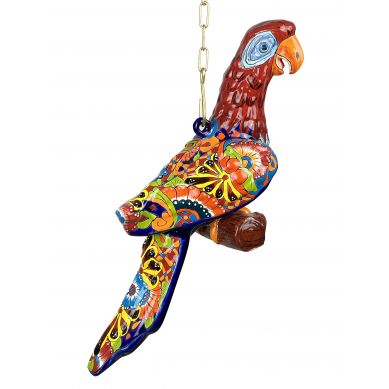 
The figurine comes with a golden chain (shown in the photos) to hang the decorations.
Figurine of a Parrot

In the culture of Mexico the parrot symbolises wisdom, imitation and cleverness. The bird is associated with outstanding intelligence and cunning. The parrot is a very large group of birds commonly found in Mexico. The parrot figurine was made in the style characteristic for the Talavera method. The head of the parrot was coloured red, while the area around the eye was coloured in contrasting blue and yellow. The beak of the bird was painted with orange pigment. The body of the parrot was decorated with floral patterns characteristic of this way of making ceramics. The craftsman precisely applied the pattern on the body of the bird and painted it with colours also characteristic of the Talavera style, shades of yellow, blue, green, orange and black. An element was placed on the back of the figurine to make it easy to hang it on the gold chain that comes with the parrot. This allows for a very realistic effect of the parrot flying through the air, looking almost like a living parrot. The figurine has been decorated with a dense natural dye and then a layer of glaze has been applied to it, creating a 3D-like effect. Figures in the Talavera style are a common element in Mexican interiors.

Talavera style of pottery production was brought to Mexico in the 15th century with the Spanish colonizers. This style is characterised by decorations referring to symbols of flowers and leaves, coloured with natural paints with a dense structure. Talavera products are unique ceramics produced in very short series, which makes them highly sought after by collectors from all over the world.

47,00 € Out of stock
We give cookies to anyone who visits our website! By using this website you agree to their use in accordance with current browser settings. Close More information