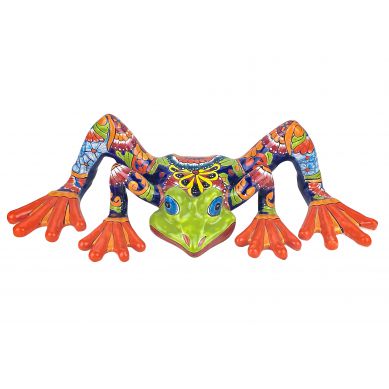 Each piece is unique, so the colour of the delivered frog may slightly differ from the one in the photo.
Frog Figure

The frog is a symbol of lasting wealth, prosperity and abundance. In addition, the frog is associated with change, renewal and rebirth. The symbol of the frog is a very popular decorative element in Mexican interiors. The figurine of the frog was decorated by an artisan with floral ornaments and decorated with the colours of nature. You can see the craftsmanship of the artist, who placed the patterns on the figurine with great precision and coloured them in the characteristic Talavera shades of green, yellow, blue, orange, brown and black. The frog's head is decorated with blue-black eyes, while its paws were painted in contrasting brown. The pigment with which the figurine was painted has a dense structure, which makes it possible to achieve a 3D effect. The finishing layer is glaze, which provides resistance to mechanical damage and durability.

Figurines made in the Talavera style

This way of making ceramics came to Mexico from the Spanish village of Talavera de la Reina in the 15th century. Talavera ceramics are characterised by floral patterns, careful workmanship and craftsmanship. Talavera products are unique, produced in very short series, which makes them very popular among collectors from all over the world. The exceptionality and uniqueness of these decorative elements makes them able to reach very high prices.

60,00 € pcs in stock | Shipping in 24h
We give cookies to anyone who visits our website! By using this website you agree to their use in accordance with current browser settings. Close More information