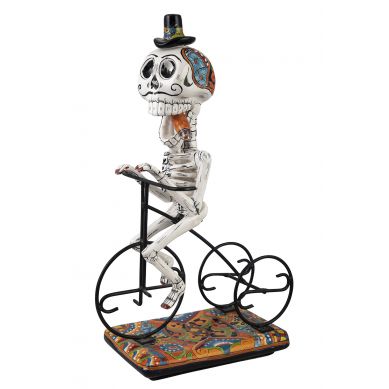 La Catrina referred in a mocking way to the "wives of fashion," ladies who wanted to resemble their European counterparts. The garbancera was the female equivalent of the dandy, the buffoon, the dandy, whom Diego Rivera (Frida Kalho's husband) called Catrina. Therefore, it is not surprising that figurines of male counterparts of La Catrina, referring to the original, are becoming more and more popular. The figurines depict a man without a corporeal shell, a skeleton in a Mexican hat or sombrero, often in various everyday situations, on a horse or a bicycle. La Catrin men are often dressed in traditional Mexican costumes, these may be clothes such as Mariachi or elegant tailcoats and cylinders.

La Catrina is a figure that was invented by José Guadalupe Posada, referring in its design to the Mexican festival of the dead. The figures do not have any religious significance, instead they mark the presence of the spirits of people who have ended their earthly lives. Catrines symbolize the passing away, the inevitability of death, regardless of wealth or social status. The Mexicans believe that death is only a part of life and it is not worth fearing the inevitable. Perhaps death is the ticket to a better, more joyful life. On the Mexican Feast of the Dead it is very popular for women to dress up as Catrina and men as Catrinas. Deadly made up is ubiquitous, necessarily with a highlighting of the blue eye sockets and chipped teeth. Faces are usually decorated with colorful flowers.