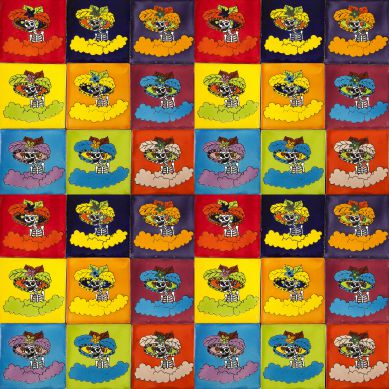 Catrinas is a patchwork with the Calavera Catrina motif, which has a special place in native Mexican culture. It is important to know that for a Mexican, death is not the end but a continuation of life, which here on earth is just a flash, something impermanent. Thats why, the representations of death are not scary and do not cause fear.

Just like in our special patchwork, where a female skeleton appears, dressed in an elegant hat, decorated with jewelry. This portrait, placed on tiles in variously colored backgrounds, brings to mind pop artworks of Andy Warhol, e.g. the one from Marylin Monroe.

Talavera Calaveras tiles are hand made by artisans in Mexico.

Tile arrangement simulator They are not perfectly identical and that is their charm. The enamel can bear the marks of small cracks formed during firing, and the patterns may differ slightly because they are all painted by hand.

The tiles are resistant to abrasion and even with deeper scratches the pattern is still visible, as the individual colors are contained in the glazing. Each tile is first covered with a primer - the base color, and then each pattern color is applied separately. After firing, the tiles get their final colors as well as extraordinary resistance.

100,00 € 120,00 € pcs in stock | Shipping in 24h
We give cookies to anyone who visits our website! By using this website you agree to their use in accordance with current browser settings. Close More information