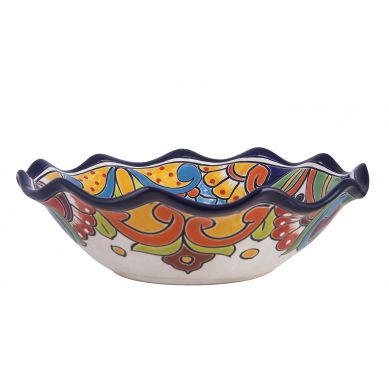 Quite a big bowl decorated both inside and outside with patterns referring to the symbolism of flowers, characteristic of Talaver's style. Wave-shaped bowl edge marked in blue is separated by a white line from the rest of the decoration. The pattern inside the bowl is quite detailed, with the inflorescences, leaves and stems marked. On the pattern, a thick layer of thick dye in shades of yellow, blue, orange and green was applied by hand. The whole decoration is harmonious and consistent. The way of applying the dye causes an effect similar to 3D.
The bowl will of course be ideal for serving Mexican dishes, salads, soups, sauces, but also for chips and nachos.
The way Talavera is produced guarantees high durability of the bowl and resistance to abrasion.
The bowl is a perfect decorative element that looks great in a dresser with other Talavera products. The bowl can also be hung on the wall using special holders.

Telavera's production method was brought to Mexico in the 16th century by a Spaniard. Telavera is an appreciated way of producing faience in the world. In addition to decorative elements, more and more often tiles and terracotta tiles produced in this method are used for interior decoration. Interior designers often use Talavera's patterned tiles as decorations on the background of single-color tiles. It is worth mentioning that Talavera's decorative elements are often purchased as collector's products.

Set of copper pans from Mexico

16,00 € pcs in stock | Shipping in 24h
We give cookies to anyone who visits our website! By using this website you agree to their use in accordance with current browser settings. Close More information