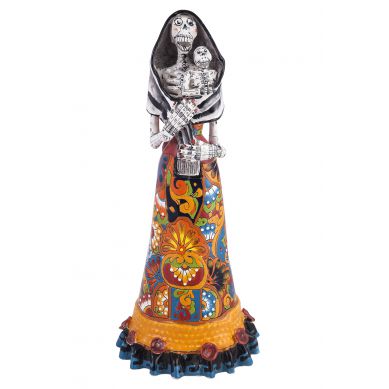 The figures of India are a group of La Catrina figurines with a style referring to the Indian part of the Mexican population. Figures are characterized by decorations associated with traditional Mayan and Aztec costumes. In addition to the floral patterns, craftsmen often applied symmetrical ornaments known from engravings found by archaeologists in ancient Aztec towns. India figures often have long brown braids worn by Mexican Indians. The figures are sometimes adorned with scarves and bedspreads worn by this group of Mexicans. The colors of India figures are mainly prairie, that is shades of red, orange and yellow, interspersed with black and brown. The figures are produced using the Talavera method, which came to Mexico in the early 16th century. India figurines are closely related to the tradition and culture of Mexico.

La Catrina is a figure symbolizing death, designed in the first years of the 20th century by José Guadalupe Posada. La Catrina is a woman without a shell, who is usually dressed in a beautiful dress and a large elegant hat with feathers. She is a very popular figure especially on the day of the Mexican feast of the dead. La Catrina symbolizes contact with the spirits of deceased family and friends. Mexicans believe that death is only part of life and is not afraid of it. La Catrina figurines can take different forms, they can also be animals and men. Patterns referring to Catrina, i.e. skull or skeleton can be applied to ceramics, textiles and other everyday products.