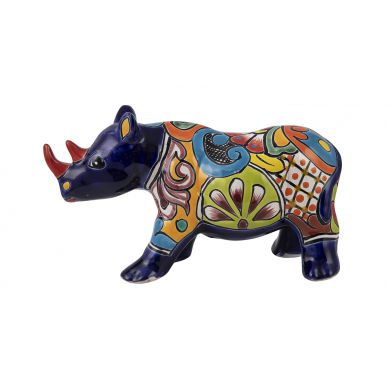 Rhino Figurine
Rhino figurine made with Talavera method. The figurine is decorated with floral patterns so popular in this style. The dominant colors used by the artist to paint the figurine are blue, yellow, brown, and black.
The symbolism of the rhinoceros is very broad, and it is hard not to notice a certain paradox: on the one hand, the animal gives the impression of being clumsy and slow, but when attacked, it turns into a very fast, dangerous mammal. Rhino is a symbol of strength, stability and longevity. It is strongly connected with the earth and nature. The properties of rhino horns, marked on the figurine with a strongly contrasting orange color, are also known. The rhino is an understatement and a message that nothing is as it seems.
The rhino figurine is impressive and will look beautiful in a prominent place of a Mexican style room, but not only...

Talavera style Mexican figurines
The Talavera method of production is a method taken from the Spanish town of Talavera de la Reina. The method is characterized by the artisanal way of forming the product, decorating it, glazing it and firing it. Talavera products are known for their high durability and resistance to mechanical damage. Talavera figurines are extremely decorative and can emphasize the climate and style of an interior. Due to their uniqueness they are often sought after by collectors.

29,00 € pcs in stock | Shipping in 24h
We give cookies to anyone who visits our website! By using this website you agree to their use in accordance with current browser settings. Close More information